We live in the age of information. Gone are the days when you had to look for an encyclopedia or visit a public library to get knowledge about anything. It is said that information is power, and indeed, it is. Search engines such as Google have made accessing information on any subject easier. Despite the technological milestones we have made in terms of getting access to information, there is the danger of accessing information that has been contorted to serve other interests or simply misinform. Read on to know about the misconceptions that teenagers have about God.

God is the creator, king and therefore must be revered as such, however, teenagers equate God to many things. In one of the commonly held youth seminars, a young woman when asked about whether she was dating or engaged, she responded by saying she was married to Christ. Jesus Christ is given many attributes in the bible among them the prince of peace, the lion of the tribe of Judah, Messiah, beloved son of God, King. No place is Christ mentioned as a spouse or boyfriend to anyone. The furthest the bible goes is to depict Christ as a bridegroom who will come for his bride the true church in the last days. Therefore, it is inappropriate to bring down your savior and Lord to the level of your boyfriend or special other.

This statement is mistakenly used to portray Jesus Christ as having it all. A preacher, with no ill intentions could innocently use these words to illustrate to teenagers how rich they are in Christ. After all, the bible mentions that the whole world and everything in it belongs to God. However, teenagers might interpret this statement differently and acknowledge Jesus Christ as a millionaire rich in gold, jewelry and worldly treasures and not Jesus as their saviour. In John 3:16, the bible mentions that whoever believes in Christ shall not perish but have everlasting life.

Christ sole mission on earth was to seek and save the lost and that is where it stops. The bible talks of Christ as a humble human being who had no means of financing his ministry. He carried out his ministry on earth with 12 numbered disciples and a host of many others including women who provided for them.

God the father, the son and Holy Spirit cannot be classified with human classifications of billionaire, millionaire or zillionaire. He is the alpha and omega, the maker of heaven and earth who out of love for humanity sent his only begotten son to redeem them from their sins.

Teenagers use the word cool to mean they are enjoying life and living it to the fullest. It could also be used to mean they are trendy and classy in terms of fashion and the clothes they adorn. Unfortunately, the word cool is being used inappropriately with reference to Jesus Christ. Communication is no excuse. Words written in the bible should be mentioned as they are without any creativity to avoid deception and heresies.

Mere words presented before people without their original meaning and expression lead to more confusion and misinterpretation of the scriptures in the bible. It is true that slang words have really grown especially as a way of communication among the youth, however, for the gospel to make sense and change the lives of people, it must be presented as it was originally written in Hebrew and translated into English.

A hit song once filled the airwaves with the Swahili words umesamehewa na fundi wa mbao. Within no time, youths began dancing to the song in churches and concerts. We are products of what we listen to overtime. While the singer to the song might have wanted to be creative and appeal to the youth, he missed the point in presenting Christ as a carpenter who saves. Youths and more so teenagers are to be careful about songs presented by the contemporary gospel industry. A number of their lyrics are unbiblical and used out of context.

It is important that teenagers recognize God and the trinity as the bible presents him and not in misinformed ideologies. Every bible believing Christian should watch against heresies and defend the word of God for what it is.

Discover the 7 Secrets to Breaking a Bad Habit0 Total Shares

Is the Marriage Institution Under Siege? (Part 2)0 Total Shares 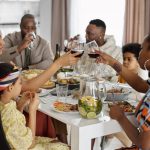 Discover the 7 Secrets to Breaking a Bad Habit0 Total Shares

Is the Marriage Institution Under Siege? (Part 2)0 Total Shares